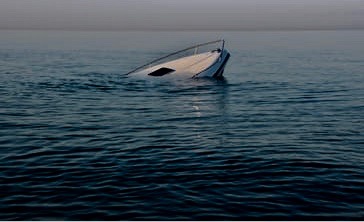 ‘Eventually, as the years passed, only myself and Millar remained on Ynys y Niwl and new food, rarely called at the large black house any more. Now, here I am laying Millar’s latest repast remains to rest and who knows when the next warm meal will be dropping by. I’ve known this day would dawn for many decades, if the truth were told. This latest, and hopefully my last body, with its empty skull, will be easy to hide, it’s just a matter of crushing a few bones and adequately covering up the remainder of the cadaver until the rich soil of the glade has done its work and reduced the whole bloody mess to white bones.’

When the task of interring Harold’s corpse was completed, it was barely six inches below the surface but expertly hidden, underneath a thick layer of moss. Now, there was only the stranger’s boat to get rid of and the ‘Hell’s Mouth,’ as he called it, lay just beyond the reed beds at the far end of the landing spot. That place was very accommodating, it was well disguised and had unnaturally deep water, which lay within a stone’s throw of the island. It more than adequately swallowed up small craft and left no trace of their passing. He’d fed various boats to the ‘Mouth’ over many centuries and Gideon considered himself to be rather fortunate, to have found such a black abyss, so close to the island. When he had plumb lined that area just beyond the reeds, trying to find the deepest hollow, he’d been amazed, it was longer than all of his ropes put together and from that, he’d assumed the reeds grew on some kind of plateau, immediately before the edge fell away into the sunken depths. All he had to do now, was silently sink Harold’s irksome craft and watch it vanish into the deep forever.

Gideon walked around to the rear of the old house and entered, “The Crystal Cave,” as he’d named it, by means of the seemingly unusable stone steps. Everything in this area of Wyndwrayth’s bowels, was a creation of Gideon’s furtive mind. Over the many years of his internment on Ynys y Niwl, he’d had plenty of time to perfect his ‘gift’ and this hidden area, where nobody ventured, was ideal for that purpose. He trod the rough path, that had over the centuries, become familiar, until he reached the abandoned mooring, with its single ornate vessel, tied up to a stone capstan.

‘Stop dallying on the job and admiring your creation, just get on with it whilst the full moon is high,’ he thought and then realising, that dallying was exactly what he was still doing, Gideon picked up his pace and was soon approaching the small Swan headed, wooden craft. He quietly climbed aboard and slowly rowed the graceful white vessel, out onto the lake and round to Harold’s boat, untethered her from the ring and looped it round the Swan’s head. Then, quietly and stealthily, he towed the craft into the reed beds, filled her with stones, opened the bilges and for good measure, swung an ancient battle axe high in the air, bringing it down hard, deeply burying the blade in the hull of this doomed vessel. The blow cleaved a large hole in her Oak boarded bottom and the icy lake water, flooded in. As ‘The Lady T’ slowly sank beneath the surface, Gideon re-boarded the Swan and watched carefully. Wooden boats had, over the years, proved to be sometimes difficult to sink due to their buoyancy. He was hoping this stupidly pretentious white vessel, could be laid to rest with ease.