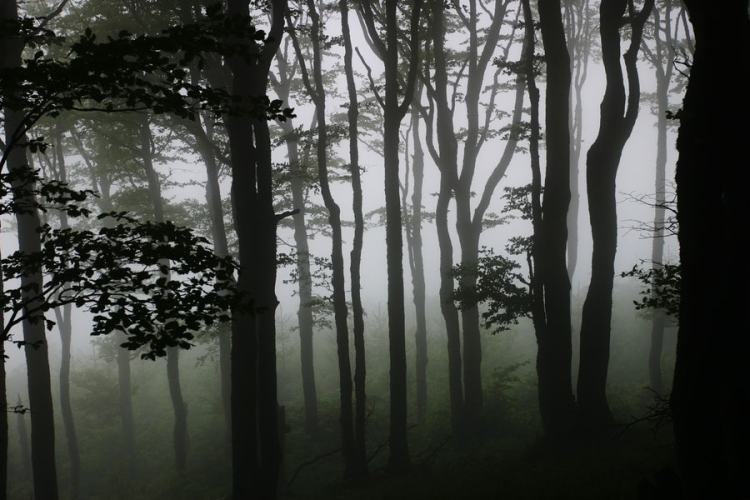 During this last summer, he’d spent a great deal of time, fishing from this boat, holding one sided conversations with ‘her’ and as a bonus, he’d also eaten an awful lot of Trout for his evening meals. However, today the rods had been left at home and the maps had come out.

“Different kind of thing today,” he informed her, as he climbed aboard and put his rucksack down in a secure place, still easily accessible from the ‘Captain’s Chair.’ Nick had set his own rules, ‘for conducting oneself on the water’ and as pretentious as that was, the humour that it engendered was worth it. There were only three boats that plied the lake and they were rarely on the water together but that made no difference.

“Standards have to be maintained,” he said loudly, as Venezuela sedately made her way out of the boathouse at 5 miles per hour, with him standing stiffly, like some kind of crazy figurehead, jokingly giving the stiff right armed Nazi salute.

Ahead lay Fog Island and for some unknown reason, his heart was beating a little bit faster as the mist shrouded island drew ever closer. He had to circle the island carefully twice before he found a spot to tie up on.  There was nowhere remotely possible except on it’s far side, facing the sheer cliffs rising from the lake. Even the spot he’d found meant he’d have to leap for it……. Giving himself the customary one wet foot:

When he was sure that everything was secured, he grabbed the rucksack, with its map and provisions, slung it across his shoulders and headed in shore. At the tree line Nick turned and cast a look back across the lake towards the dark, forbidding escarpment before setting off into:

“The dark interior of Fog Island,”

for which he employed a really rough Glaswegian accent, then laughed. Here he was, a mere eight hundred yards across the watery surface from his boathouse but at this moment, it could have been measured in years. A shudder of childish excitement rippled through his body. He recalled the dull glow of light he’d imagined he saw last night, coming from a source deep inside this green and tangled domain.

“Well, it’s hardly darkest Africa but it is equally deserted, or so I’m led to believe.” The Glaswegian had spoken again and it was now, that Nick realised he would be with him on the island, all day.

He’d barely taken half a dozen steps, when he ran up against the first major problem. Fallen trees and thick vines, seemingly blocked his way at every turn. He quickly realised that he was going to have to walk along the narrow shoreline of pebbles, which dropped steeply away into the lakes depths, until he could find a track that led inland.

“Inland, to what?” He cried out loud, as it seemed to him there was no break in the unforgiving foliage. Fog Island was quite large, as far as lake islands went, measuring roughly eight hundred yards in length, by two hundred and fifty, in width. Nick reckoned that he must have already covered at least half of its length by now, without seeing anything which promised him an easier path into the centre. He was about to give up and head back to Venezuela, when he spied a narrow gap in the tangle of tree limbs and creeping vines.

“Hmm,” he muttered. “Don’t get your hopes up, Nicolas, it’s probably just an animal track,” he said and then, suddenly stopped when he realised it was too wide for a rodent or bird. The island was supposed to be uninhabited and if that was so, how did the whatever it was that made the track, get here? He looked back along the trail, that he’d just taken, to the shoreline and from there, out across the expanse of water beyond. From shore to shore, there was a great deal of rather deep and very cold water, too much for any local animal to traverse, to reach the Island without a boat and there seemed nothing to sustain them anyway.

‘Indigenous?’ Mused Nick but dismissed that proposition, it was hardly the Galapagos. “Aye well, perhaps it’s a long-lost family of Velociraptors, or a wee Welsh Nessie,” he depreciatingly whispered in the rather pitiful Scottish accent. “Rats, plural!” he expounded as if a light had suddenly been turned on. “Of course, now why didn’t I think of that earlier?” Nick stated confidently, as if such a revelation was somehow novel. “Rats,” he said again, as he looked down at the trackway and attempted to estimate their size and number, by gauging the width of the path he was following. “They’re big buggers too,” he muttered, as he walked slowly onwards, his eyes darting from side to side warily….. “and there must be a lot of them….”

As he moved deeper into the hinterland, following this ‘Rat-way,’ Nick noticed that the air grew ever warmer and the humidity was rapidly rising. Underfoot, the ground became increasingly boggy and a thick layer of moss now replaced the slippery, pebbled landscape of the shoreline.  There was a strong smell of mulchified and rotting vegetation in the dead air. Nick was starting to question the wisdom of coming here at all. ‘Maybe I should have told somebody I was going to come here today,’ he considered. ‘It might, after all, have been the wisest choice,’ he cautioned himself as he stepped into what could only be described as the prefect, Fairy Glen.

The red and white caps of Fly Agaric mushrooms, grew abundantly amid the bows of a surrounding copse of Silver Birch trees and in the short grass beside them, what appeared to be thousands of Psilocybe Semilanceata, better known as the liberty cap ‘shroons’ he’d consumed in great numbers, when he was a younger man.

“Look at them all,” he gasped and he bent down to pick a few, for old times’ sake.  In his murky past, the discovery of this number of ‘magics,’ as they were parochially known, meant a couple of V.H.S Videos and a night or two of belly laughs. ‘They were indeed great days,’ Nick thought absentmindedly and smiled.

He didn’t know it at the time but he had inadvertently stumbled onto, what was the old croquet lawn of the once great house and as he looked up and over to the right, there stood the ivy-covered ruins, of ‘Y Wake Gwynt.’

“Wow! So, you really do exist…,” he smiled to himself.

Only a limited amount of dappled sunlight made it through the overlapping branches of the trees, crowding in on the observer, creating an intense feeling of claustrophobia. Nick sat himself down on the nearest piece of flattish land and after rummaging around in his ‘sack, withdrew his trusty old Ordinance Survey Map and laid it out on the mossy grass before him. According to the map and judging everything by the rule of thumb, he reckoned he was almost in the very heart of the island. Nick stopped and looked all around, for any sign of another living soul but nothing moved in the silent space. All around the old lawn was a thicket of knotted ivy and interlocking tree branches, which created the illusion of helpless imprisonment. It was almost as if the gardens, were still being tended by a ramshackle gardener, who had some unspoken ambition, which would be revealed only by the passage of time.

Strangely, as he’d approached the central area, a slight and somewhat sporadic breeze could be detected, drifting in from a South-Westerly direction. Since, this was a more comfortable area of the island, he decided to take his lunch here on this long-lost croquet lawn, before pressing on with his exploration. Taking his time, he ate his egg sandwiches, some biscuits and drank his coffee whilst smoking one of his pre-rolled joints. There was still more than enough time to take a closer look at the ageing mansion, glimpsed beyond ‘the green wall’ that lay between him and the dishevelled stonework, of ‘Y Wake Gwynt.’

Finished, he moved to secure the weighty rucksack into its position on his back and shrugged, to locate the straps that were trying to bite into his shoulders. Then, Nick stopped his struggling as he realised that since he was the only living creature on this island, there was no need to carry it. ‘Unless you account for the apparently massive Rats,’ he thought and just to be sure, secured the sack with the rest of its provisions, high up in a nearby Oak tree.

“Figure that one out, sucker’s.” He said with a self-satisfied sense of superiority, even though he hadn’t seen one of these imagined adversaries all morning. Confident his supplies were secured, Nick took his first step towards ‘Y Wake Gwynt.’ Eagerly, he sought any place to gain access to its inner sanctum…….