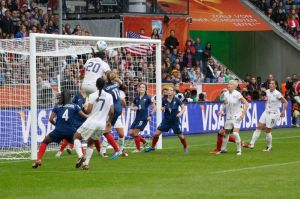 The Women’s World Cup, is fascinating and I’m really enjoying the whole thing. I don’t watch much Football these days. Played it. Been there. Seen that, even bought the fucking T. Shirt but I’d hate to miss a single game of this competition.
It’s class on legs and it seems that they take more real punishment than men and don’t fake injuries so easily.
“Tough women are where it’s at.”
Wayne Rooney may be ugly but he’s not as classy as Megan Rapinoe. She’s an American midfielder / winger, by the way.
“Babble, babble, babble” and really nothing more to say. There it is, “all the news that fits,” in a few lines, and I’m going now.