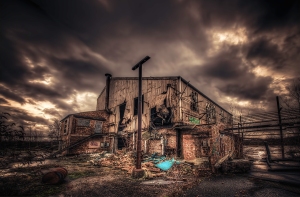 He stood on the bank, next to The Ravens Gate Bridge and looked at the brooding black outline of the ornate structure, as it crossed over the still waterway. The rotting metal archway merged into the giant wrought iron gates with their Cast Iron Ravens perched upon its peak, reaching skywards. In this light, the factories silhouette looked like that of an ancient city, long deserted and forgotten by men. It was as if the memories of those who had once lived there, had somehow become dulled and oblivious to it’s existence. As he stood by the water, looking again at this bridge in the gloom of the new dawn’s light, he couldn’t help but feel a sense of ominous foreboding. Frank, shuddered involuntarily and then speedily made his way, along the steadily warming gravel, towards the huge barge that was going to deliver the death blows, to this old Industrial Installation.
———————–o0o———————
Mercifully, Frank, was only aware of the initial cut, he was gone from this world before the Raven’s stripped the skin and flesh from his bones, leaving him on the ground, in a soup of bloody gore and bird shit.