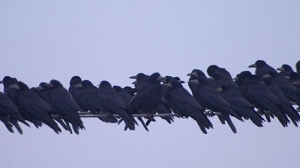 That’s when he saw them, the mass of dark birds, clinging to the pylons that supported the broken roof of the building. Their eyes glinted menacingly as they stared at him down below, in the dark. “Shit,” he said, more out of shock at the number of birds, than out of fear, “Look at them all. There must be hundreds of the fucker’s up there” and, trying not to panic, he redoubled his effort to locate the way out. He dashed across the darkened floor, in the direction of the footprints and almost ran straight into the door. He saw it at the last moment and stopping himself just in time, tried to push the entrance open, but it would not give. He felt the panic rising, he was trapped in here with all those birds and whatever was making that scraping noise and had thrown that huge slab into that fetid pool. He felt the sweat beads, trickling down his neck, as he groped for the fastening mechanism and his breath was becoming ragged. His mind again screamed continuously now, “GET OUT! GET OUT!”